Carn Fadryn (Garnfadryn) was the sacred destination for the second group of German retreatants on our Discovering the Heart of Buddhism retreat this August. We could not have chosen a better day to explore the Welsh sacred landscape, the skies were clear and the sun was hot – an auspicious day to initiate out ten German guests to the practice Welsh Pilgrimage.

Lama Shenpen and Rigdzin Shikpo had once asked H.H. Dilgo Khyentse Rinpoche about the possibility of finding holy places in Britain. He asked for a map of the area and identified a number of sacred places in North Wales. The one he felt stood out as  being particularly special was Carn Fadryn.

Khyentse Rinpoche was one of the foremost Tibetan Buddhist teachers of his generation and was highly respected as a Terton – or Treasure Finder. He had found many sacred objects and Buddhist texts (Termas) hidden in the landscape of Tibet and the surrounding Himalayas. His naming of Carn Fadryn as a place of strong spiritual significance should therefore be taken very seriously.

Carn Fadryn translates as something like “mother mountain” and has strong feminine associations, a fitting destination for an all female retreat from the German Sangha (Buddhist community) Tara Libre. Some sources link the mountain with Modrun, the grand daughter of Vortigen, the Welsh hero and famous Celtic King.

There is also a legend linking the mountain to King Arthur.  There is a cromlech (a standing stone burial site) named “Coetan Arthur” (Arthur’s Quoit) at Trefgwm. It consists of a great stone resting on three smaller stones. The legend states that Arthur “the Giant” threw the largest stone from Carn Fadryn – a distance of several miles. His wife then picked it up and propped it on three smaller stones from her apron!

We parked at the handy lay-by at the foot of the mountain in the village of Garnfadryn and began our ascent under the glorious sunshine. The mountain has a height of 371 metres, but has a well trod track through heather slopes and is a relatively easy walk (approx. 45 minutes) with a few high steps in places.

The summit marked by ancient cairns and a modern trig point, was the sight of at least three ancient hill forts. The earliest dates from around 300 BC.  The most recent was recorded in 1188 as “newly built” and referred to as “the castle of the sons of Owain”. 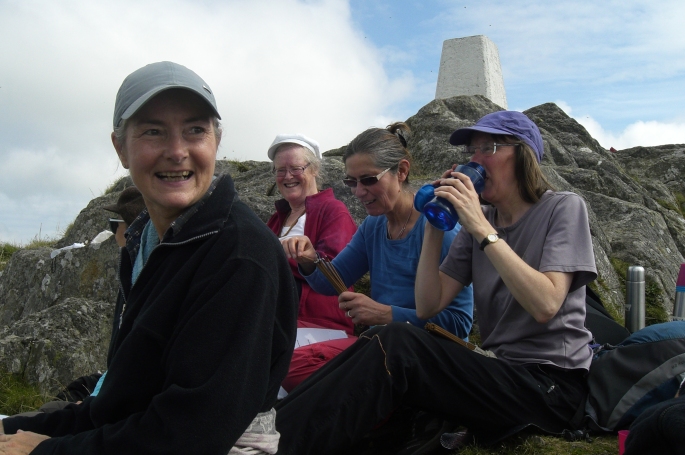 We performed our Smoke Offering Puja (ritual) with chants and mudras (ritual hand gestures) before tucking in to our well deserved feast. The feast was accompanied by many yogic songs – in both German and English. Afterwards, we enjoyed a spot of sun-bathing – almost unheard of on our Welsh pilgrimage outings!

The views from the summit were amazing. We had a complete panoramic view of the whole of the Llyn Peninsula from one coast to the other. Nearby, we could see the two small twin islands of Ynys Gwylan-fawr and Ynys Gwylan-bach; further out we could see the popular pilgrimage destination of Bardsey Island and the Isle of Angelsey (Ynys Mon) with its Druidic associations. The mountains of Snowdonia could be seen brooding in the far distance. Although a fine day, we were unable to see the Wicklow mountains of Ireland, which can sometimes be spotted. 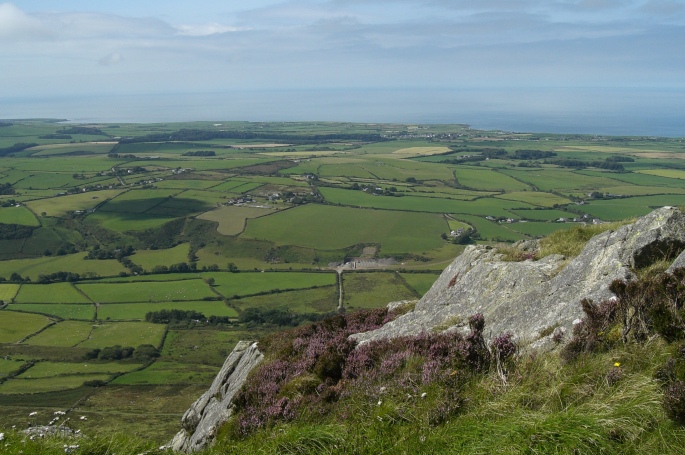 As we made our descent back to the cars our minds slipped from holy sites and legends of old to the more mundane – beaches and ice cream! A great way to end a pilgrimage.     By Jayasiddhi