Dinas Emrys in Snowdonia was the pilgrimage destination for 23 German students visiting us for a Discovering the Heart of Buddhism retreat. At the end of their week of meditation, study and discussion, they were more than ready to stretch their legs and explore the sacred and holy sites of Wales.

Tara Anne Dew (our resident pilgrimage expert) had chosen Dinas Emrys as the destination for this pilgrimage as our guests had travelled a long way to be here and Dinas Emrys is regarded by many (including Rigdzin Shikpo) as the “most powerful location” in Wales.

Associated with Celtic King Vortigern and Merlin (Myrddin Emrys), this is where Merlin discovered the red and white dragons (representing the Welsh and the Saxon peoples) were buried under the hill. Merlin released the dragons and the subsequent fight led to a victory by the Welsh red dragon over the white Saxon dragon. This event is commemorated on the Welsh flag. 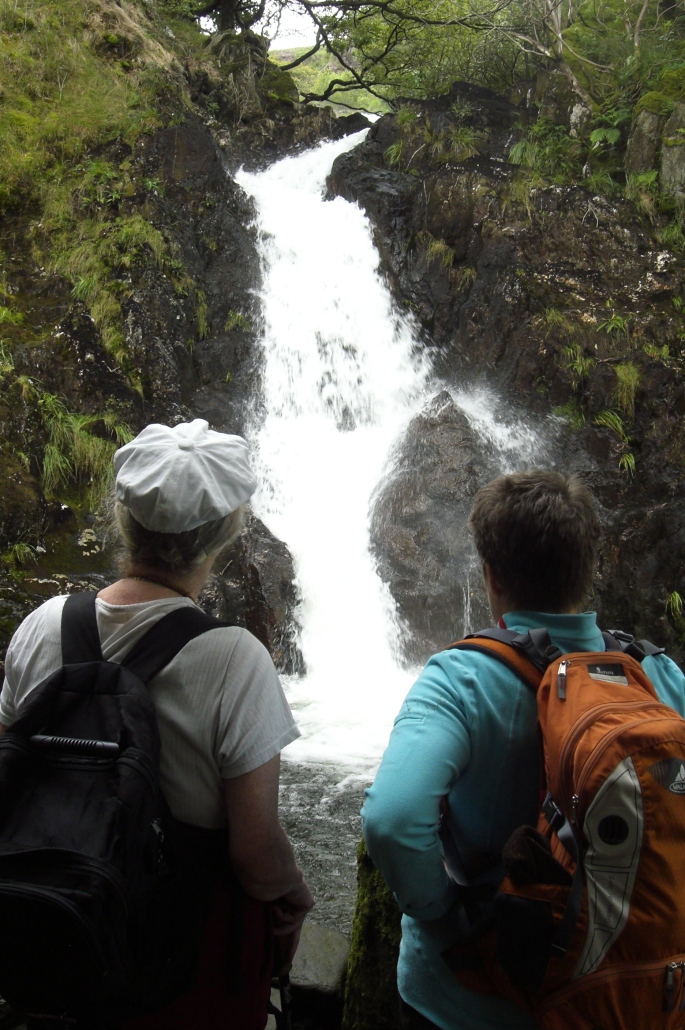 The previous few days had been quite rainy and so the waterfall at the foot of the hill was in full flow and quite invigorating to watch. We spent some time there chanting the Green Tara mantra.

On the ascent we were treated to a wonderful view of the lake and the surrounding mountains. The heather was very bright and colourful and the whole place felt very lush.

By the time we arrived at the remains of Vortigern’s hill fort, the rain began to fall and we all donned our waterproofs before starting the smoke offering puja. As is often the case, once we had lit some incense and started our chanting the rain stopped completely and sun broke through the clouds. We were able to enjoy the rest of our puja and the feast that followed in comfort.

The German ladies were in fine form and sung us some beautiful and stirring songs. Lama Shenpen and Tara sang and danced along the top of the tower foundation wall. A lot of fun was had by all.

On the return walk we stopped in a particularly atmospheric glade. I experienced a very strong sense of presence in this spot. Lama and Tara performed the Buddhist Tara dance for us, which I had not seen before. It was really wonderful to watch.

When we arrived back the National Trust Centre we appeared to have lost two German pilgrims. We searched the wonderful Cafes and ice cream shops of Beddgelert for them (at least this was our excuse!). Not finding them we retraced our journey to Dinas Emrys hoping that they had not been tempted off the path by the faerie folk! Happily we found them quite quickly – they had taken a wrong turn on the descent and were awaiting us in the very informative National Trust centre.